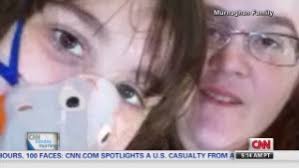 The high profile story of two children who need lung transplants has moved organ transplant board members to action, with ramifications for other youngsters in need of new lungs.

In a revision of existing policy, the executive committee of the board that runs the organ transplant system ruled Monday that children 11 or younger can be considered for transplant from an adolescent or adult donor.

But the new policy will expire next July, unless the full board of the Organ Procurement and Transplantation Network/United Network for Organ Sharing keeps it in place, the organization said in a statement.

The executive board voted Monday to let children’s doctors appeal to a review board to classify some children 11 or younger as adolescents, potentially giving them access to more lungs than just those available for pediatric transplant.

In such cases, their priority on the adult list would be determined by their Lung Allocation Score  –  essentially a measure of disease severity  –  and children would retain their position on the pediatric list, the board decided.

“The number of patients potentially affected by this policy is very small and unlikely to have a significant impact on the larger pool of transplant candidates,” the executive board said.

Before the ruling, children younger than 12 could only be considered for a transplant from a pediatric donor.

The issue got a national spotlight when the families of 10-year-old Sarah Murnaghan, and 11-year-old Javier Acosta, 11  –  both cystic fibrosis patients at the Children’s Hospital of Philadelphia  –  sued to change the rule.

In response, Federal District Court Judge Michael Baylson ordered that the under-12 rule be suspended for both children for 10 days. He was to hear further arguments on the issue this coming Friday.

In a statement to the transplant network’s board before Monday’s decision, a lawyer for the families argued there are both medical and legal issues involved.

The medical issues, according to Steve Harvey of Pepper Hamilton in Philadelphia, include whether there is a “sound scientific basis” for excluding the two children and others in similar circumstances from the adult list, in which priority is determined “primarily on medical severity.”

Legally, he said, the question is whether the exclusion violates the National Organ Transplant Act.

Harvey was not immediately available to comment on the ruling, but another member of the legal team, Melissa Hatch, told MedPage Today: “We think it’s a good decision.”

“We believe there should be room for medical discretion,” Hatch said.

The hearing Friday is intended to see if the temporary restraining order granted by Judge Baylson should be continued, but the network board’s decision, Hatch said, would indicate the continuation would not be needed  –  the authorities should simply let the two families and their doctors go through the new appeal process set up by the transplant network’s executive board.

“The government should decide that the relief granted by the temporary restraining order should remain in place while Sarah’s and Javier’s doctors have time to make use of the appeals process that was created yesterday,” she said.

As of Monday, the transplant board said, 1,659 people are waiting for a lung transplant nationwide, including 30 who are 10 or younger. Since 2007, only one child younger than 12 has been given a lung from a donor older than 18.

Overall, the system is fair, according to Stuart Sweet, MD, of St. Louis Children’s Hospital, who is secretary of the transplant board’s executive committee.

He told the committee that the current lung allocation policy “has to date served the majority of candidates well.” But, he added, the judicial ruling has put the system “at risk.”

“We cannot undo the dangerous precedents set by the judiciary as a result of this case,” Sweet said. “But we can take steps to ensure that the next time this question arises the case can be heard in a more appropriate venue.”

He suggested the interim policy, which expands the power of the organization’s lung review board  –  made up of transplant professionals  –  to allow an exception to the pediatric lung allocation policy if members think doing so is “warranted.”