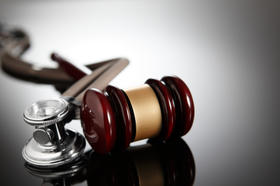 The “Patients First Reform Package” would make it harder to successfully sue a doctor for malpractice and potentially reduce jury awards.

Supporters say the changes are necessary to reduce the need for doctors to do expensive “defensive medicine” and to cap expanding “pain and suffering” awards.

Colin Ford is with the Michigan State Medical Society, which supports the bills.

“The most meritorious cases will still continue to move forward,” says Ford, “But we have an obligation to make sure that meritless cases or questionable cases don’t move forward and we give doctors the best chance to have the most level playing field possible in the courts.”

Michigan trial lawyers complain the changes will give doctors an “unfair” advantage in the courts. One provision would protect a physician from a malpractice lawsuit, as long as “THE (DOCTOR) ACTS WITH A REASONABLE AND GOOD-FAITH BELIEF” that he or she acted in the best interests of the patient. The trial lawyers say the changes would make it nearly impossible to successfully sue for medical malpractice in Michigan.

Norman Tucker is with the Michigan Association of Justice, which represents the interests of trial lawyers. He says since Michigan’s major tort reforms of the 1990’s the number of medical malpractice lawsuits have already dropped dramatically.

“The net numbers in Michigan per year…after people file cases and dismiss them for different reasons…are averaging under 500 cases (per year) since 2004,” says Tucker. “This legislation doesn’t have anything to do with lawsuits.”

Colin Ford of the Michigan State Medical Society says there’s another important reason for passing the malpractice law changes. He says Michigan’s physician population is aging. A large percentage of doctors are going to retire in the next decade. Ford says to make Michigan an attractive place to recruit doctors, malpractice laws must be reformed.